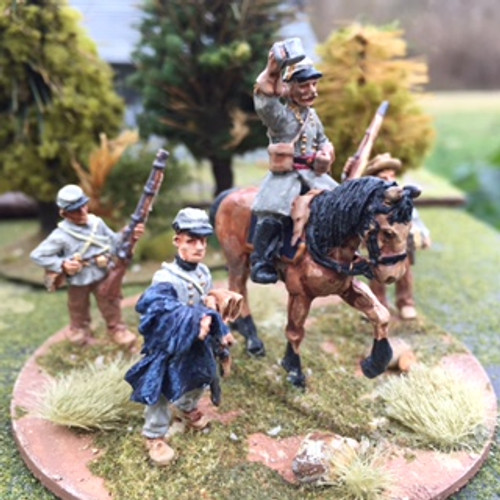 These miniatures are cast in high white metal and contain a small amount of lead.Not suitable for children under 14 years of age. Figures supplied unpainted.

The Battle of Shiloh, 6 April 1862. Confederate General Albert Sidney Johnston has launched a surprise attack on Union forces under General Grant massing on the banks of the Tennessee River. In the early stages of the battle, Confederates had overrun some of the Union camps and many had begun to loot the abandoned tents. Johnston spotted a Confederate officer with a arm full of the spoils of war and chastised him for his behavior. Observing how chastened the officer was, Johnston picked up a tin cup and declared it to be his part of the spoils.

Later, Johnston would wave the cup as he encouraged his men to launch an assault against stubborn Federals holding a position that would become known as “the Hornet’s Nest.” Johnston’s men swept the position, but Johnston would receive a wound which, although would appear slight, would cause him to bleed out shortly after the attack on the Hornet’s Nest. Historians speculate that this loss may have cost the South the leader it needed in the West to turn the tide of the war.