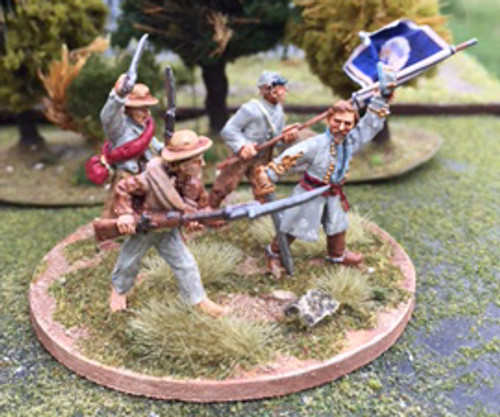 These miniatures are cast in high white metal and contain a small amount of lead.Not suitable for children under 14 years of age. Figures supplied unpainted.

30 November 1864. General Hood has lead the Army of Tennessee in a desperate bid to turn the tide of the war by invading Tennessee.

Following a failed attempt to trap the Union Army of Ohio at Spring Hill, Hood discovered the same force dug in around the outskirts of Franklin. Hood orders a frontal assault on the Union works, fearful of allowing General Schofield's force from reaching the near impregnable defensive works of Nashville.

​    Six infantry divisions, including that of Irish born Patrick Cleburne, charged the Union forces. General Cleburne, nicknamed "the Stonewall of the West," was a talented commander and beloved by his men and on that fateful day, he would lead them bravely into the inferno of Union  musket and cannon fire.

By the end of battle 6 generals, including Cleburne, were dead or mortally wounded. 55 of the Army's regimental commanders were dead or wounded.

​    This vignette depicts Cleburne and some of his men in their last moments.