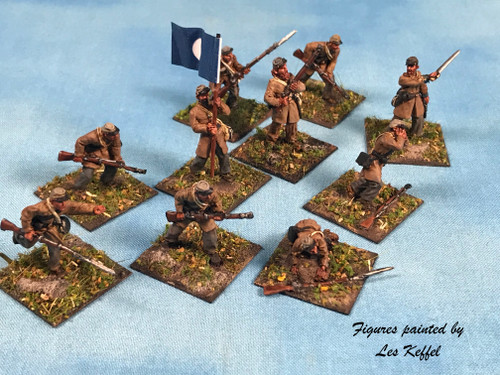 Set includes ten 25mm infantry plus dropped rifles. (Note, these figures are proporationed to the Rick Reeves figures and may not fit in with our other products.)

The Battle of Shiloh, 6 April 1862. Confederate General Albert Sidney Johnston has launched a surprise attack on Union forces under General Grant massing on the banks of the Tennessee River. In the early stages of the battle, Confederates had overrun some of the Union camps. This vignette portrays the 6th Mississippi in this attack. This vignette is based on Rick Reeve's painting of the 6th Mississippi.

Figures are cast to order.

These miniatures are cast white metal and contain a small amount of lead.Not suitable for children under 14 years of age. Figures supplied unpainted.