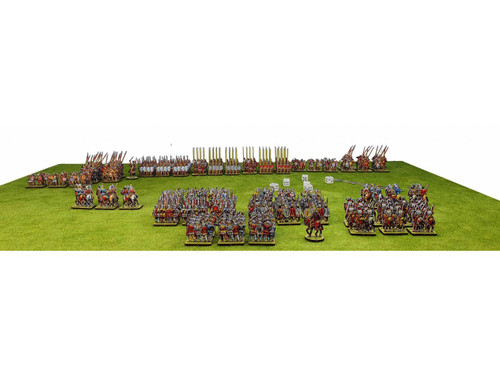 The Macedonian army has units of Infantry and Cavalry, organized as follows:

Two units of Phalangites (Medium Infantry with Sarissas = long spears): each with 6 bases. The unit operates in a 3x2 base block with all its bases touching.

One unit of Hypaspists (Heavy infantry): of 6 bases, operating in either a block or a 6 x 1 base line

Two Units of Light Infantry: of 5 bases each in a loose formation, with gaps between each base.

One unit of Companions (Heavy Cavalry with long spears) of 4 bases of mounted troopers, in a line.

One unit of Light-Medium Cavalry (with Sarissas) of 4 bases of mounted troopers, in a line

The Army has a total of 37 bases (including the Commander).

The Persian army is organised in a different way.

Two units of Medium Infantry (Kardakes and Cappadocians): each of 6 bases, in a line

One unit of close-order Archers (medium Infantry): of 6 bases, in a line

Two units of Skirmishers (Archers and Slingers): each of 5 bases, in a loose formation.

Three units of Medium Cavalry (Persian and Persian/Babylonian): each of 4 bases, in a line.

The army has 41 bases (including the Commander).

Union infantry, marching at the shoulder, kepis and packs