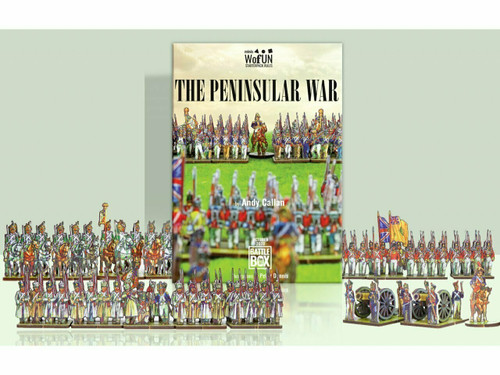 The Peninsular War 18 mm Starter Pack contains 387 characters on 5 sprues and a PDF set of wargaming rules for battles written by Andy Callan. The PDF rules will be available on your site account in the download section right after you place the order.

The Allied Army has seven units:

Command company (a Command strip including a flag, with 2-3 figurines in the rear rank).

A Regiment of Cavalry, of 5 companies

The Army has 30 companies plus one mounted General giving a total Army Strength of 31.

The Army strength number is used later in the game to measure Victory (see Stage 5. below)

the skirmishers are 6 companies of Voltigeurs (muskets), for a total Army Strength of 32.

A Company (base) of Infantry has 2 ranks of 4 figurines

A Company of Skirmishers has 3 figurines, in 2 ranks

A Company of Cavalry has 2 ranks of 3 figurines