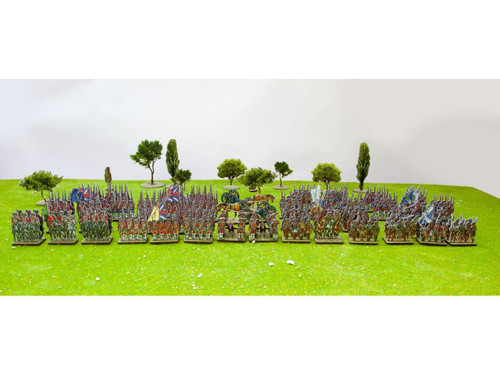 The Jacobite '45 Starter Pack contains 398 characters, and a set of PDF wargaming rules for battles in the mid-eighteenth century written by Andy Callan. The PDF rules will be available on your site account in the download section right after you place the order.

Here are the regiments included in the Starter Pack:

This pack includes 41 bases with one or two ranks, 4  artillery bases, and 33 bases for casualties. The WoFun's Standard Bases system has  30 x 20 mm bases for figurines of 18 mm scale. The bases are made from MDF (2.5mm thickness). Each base has one or two ranks (lines of figurines). Alternatively, you can choose the “No Bases” option and then order other types of bases from the Products menu – "Bases". If you choose “No Bases”, we will include in your pack only the Plexiglass sprues of figurines, so that you can make your own basing. The pictures show our Minis placed on Standard Wofun Bases.