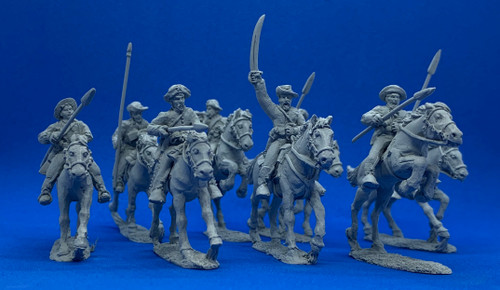 At the Battle of Valverde, the lancers charged what was believed to be an unseasoned Union unit. The Union unit was in fact a Colorado company which stood their ground.....the charge did not go well. After losing 20 men, the 5th Texas continued the battle re-armed with pistols and other firearms. Some accounts report that the lances were used for firewood that evening.

Figures are cast to order.

These miniatures are cast in high white metal and contain a small amount of lead. Not suitable for children under 14 years of age. Figures supplied unpainted. Picture of painted figures provided for reference only.