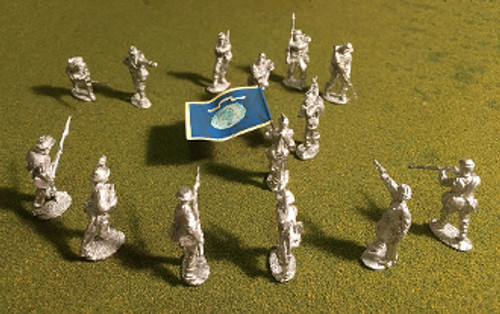 20 July 1864, north of Atlanta. The Union Army under General William T. Sherman is advancing on the strategic city after months of maneuver and battle against the Confederate Army under General Joseph E. Johnston. Sherman's men are confident as they approach the city's defenses but cautious after receiving the news that General John Bell Hood has replaced Johnston and that he is spoiling for a fight. Hood launches an attack to strike the Union forces as they cross Peachtree Creek, hoping to destroy them piece meal.

On the skirmish line is the 33rd New Jersey, a unit uniformed in the style of French Chasseur á pied troops. The 33rd soon found themselves facing waves of attacking Confederates and were overwhelmed. In the fight, the unit's regimental colors were captured by the Confederates along with many prisoners. Later, in 1865, the Union would recapture the flag in North Carolina among artifacts evacuated from the Confederate Capitol at Richmond, Virginia.

These miniatures are cast in high white metal and contain a small amount of lead.Not suitable for children under 14 years of age. Figures supplied unpainted. Picture of painted figures provided for reference only.