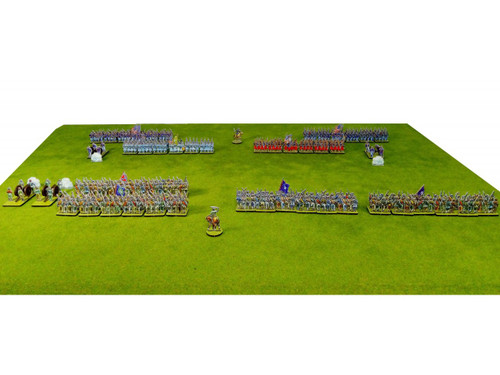 The American Civil War Starter Pack 18 mm contains figurines on 5 Plexiglass sprues and a PDF set of wargaming rules for the ACW battles written by Andy Callan. The PDF rules will be available on your site account in the download section right after you place the order.

A Company (base) of Infantry has 2 ranks of 4 figurines

A Company of Cavalry has 1 rank of 3 figurines

The Union army has six units:

4 regiments of Infantry each of 5 companies plus a Command company (with a flag).

The Army has 26 companies plus one mounted General giving a total Army Strength of 27.

The Confederate army is organized in the same way.

In the ACW Starter Pack besides the armies described above, we added a bonus sprue of skirmish infantry. You will find in the box six bases of skirmishers – three for each side that fought in this war.